Curious whether the people and events you read about in Love Finds You in Victory Heights, Washington, were real historical facts or just stuff we made up? I'll be posting "True Historical Facts about Love Finds You in Victory Heights" here on my blog. Check it out frequently, because I'll be adding more as the blog tour gets rolling! Enjoy! (Spoiler Alert: You may not want to peek until you've read the book.)
Posted by Ocieanna Fleiss at 6:32 AM No comments: 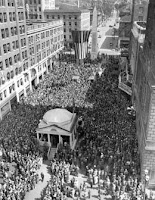 With one end modeled after the Washington monument and the other after Thomas Jefferson's house, Montecello, Victory Square was a focal point for Seattle’s World War II homefront. They'd have rallies, bond drives, and live entertainment. It was located on University Street, between 4th and 5th avenues in front of the Olympic Hotel, the monument also listed the names of Washington state citizens who lost their lives during the war.

Photo from www.historylink.org
Posted by Ocieanna Fleiss at 6:13 AM No comments:

Are you in a book club? Love Finds You in Victory Heights offers lots of discussion possibilities. I've created a list of questions to help get the the dialog hopping.

1. Would you be willing to leave your “normal” life and take on a factory job? What would be the challenges and benefits?

2. What are some sacrifices the folks on the home front made during World War II as depicted in the book? What challenges did they face? How do you think today’s society would respond if asked to make similar sacrifices?

3. Morale in World War II was propelled by propaganda. Can you come up with any examples of this? Do you think this was a proper way to rally support for the war effort? How would our culture respond to such propaganda today?

4. What did you learn about American history?

5. Throughout the book, tragedies of war invade the characters’ lives: Vic’s death, Kenny’s father’s injury, etc. Which of these glimpses most brought home to you war’s painful reality and why?

6. How did individuals from that era deal with their grief? How do we handle pain today? What are the similarities and/or differences?

7. The book displays many snapshots of life in the 1940s. Which scene most vividly depicts this for you? What aspects do you like best? Which are you glad we’ve moved past?

8. What are some acts of Christian friendship shown by Rosalie and Birdie?

9. Tilly becomes Rosalie’s Christian mentor in the book. Describe a mentoring relationship you have, either as mentor or student.

10. Both Rosalie and Kenny struggled with striving to “earn” approval from others and ultimately God. Can you think of examples of this from the book?

11. Have you ever struggled to earn acceptance rather than rest in unconditional love?

12. How did Rosalie and Kenny finally resolve this?
Posted by Ocieanna Fleiss at 7:36 AM No comments:

Love Finds You in Victory Heights, WA THE DAY HAS COME! 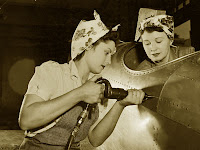 To mark this exciting day, I'm returning to Rosie the Riveter. Our character Rosalie is a riveter for Boeing in Seattle making B-17 bombers. I dedicated my part of the book to all the Rosies:

"To the Rosie the Riveters of World War II who left the comfort of their homes to brave strenuous and unfamiliar jobs in the national pursuit of victory. Your strong arms played a mighty role in preserving the freedom we now enjoy."

The Rosies signed a Victory Pledge.

"Realizing my importance as a Victory worker to my country and its cause, I solemnly pledge that to the utmost of my ability I will: Allow nothing to keep me from my job; Make the fullest productive use of time, tools, material; Use my ingenuity to develop shortcuts speeding vital output; Guard my own health and safety and that of my fellow workers; Co-operate with our Employee-Management war production drive committee to aid my departmet and my plant in producing on time and in plenty the weapons of Victory."

Pretty awesome. What else can I say?
Posted by Ocieanna Fleiss at 3:41 PM No comments:

Letters were a huge part of life in the War years. Just imagine the thrill of tearing open that letter from your loved one stationed abroad, knowing he's okay, learning about his life and thoughts. For a soldier, one sweet letter from his girl would remind him why he's fighting, bring a glimmer of joy. No wonder they called it V-mail. Victory Mail.

Here's an excerpt from a letter (shown above) written from a husband to his wife and new baby. Very poetic language.

Yes, my Darling I see you now like a far away beacon which I must reach in order to survive - so total in my eyes and mind like blindness and insanity. When we are together again we will have fun - drink and laugh - see a beautiful movie and let it take us away completely - we will joke and laugh and enjoy ourselves proper; but our dreams will once again come true, I will live within you and you within me. Our love will be rapturous and serene and you will be so beautiful to me -beauty untouched by worldly things. Only you, my beloved, in all this whole magnificent world.

News hasn't reached me yet concerning discharge or shipment. Perhaps next week, pray god. I love you both so very much.

Here's the link to a hundreds of war letters. Many are more down-to-earth than this one! (And be careful, some of the ads are questionable.)

O History! 1940s slang always makes me chuckle. Here's one. "Keep company." Know what it means??? Dating or going steady. "That G.I.'s keeping company with Betty." They also used to say, "Are you rationed?" Can you guess the meaning? A soldier might say it to a girl, asking if she was attached or taken. Sort of a 1940s pick-up line. Love how it hones in on a big thing going on at the time--rationing!
Posted by Ocieanna Fleiss at 9:35 PM No comments: 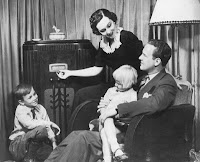 Family movie night might be the staple for our generation, but during the War years, radio was the big ticket! Imagine gathering in the living room sitting in front of the big wooden box and bonding over Abbot and Costello or Dick Tracy. Sounds like fun to me!

One of my favorites from this time is the classic Abbott and Costello's "Who's on First?" So funny! Click the link to watch a video version.

I love the old radio shows simply because they allow you to use your own imagination to visualize the scenario. Those comics, actors, writers, and producers were extremely clever.

Here's a link to an awesome Web site with lots of shows you can listen to. Do yourself a favor and instead of movie night, gather round the computer and listen to a few. Your family will love it! Radio Lovers.
Posted by Ocieanna Fleiss at 6:27 PM No comments:

Are you ever around one of those people who halt a conversation to impart a history lesson?

I'm raising my hand, cuz' those people is me. I love gifting my friends the historical facts I find riveting (fortunately most of my friends like history too--at least I think they do!).

Well, I've decided to share my love for tidbits from the past with you, too! That's what this blog is all about. Just fun, cool, or poignant historical snippets I run across in my research.

PS If you're a mommy like me, be sure to check out my Mommy-O blog for encouragment and practical tips.